Bourgeois is a graduate of Loyola University in New Orleans. He joined the Marine Corps in 1956 and entered "The President's Own" as a French hornist and arranger in 1958. Named Director of the Marine Band in 1979, Bourgeois was promoted to colonel in June 1983. He retired from active duty July 11, 1996.

As Director of "The President's Own," Bourgeois was Music Advisor to the White House. He selected the musical program and directed the band on its traditional place of honor at the U.S. Capitol for four Presidential inaugurations, a Marine Band tradition dating to 1801. He regularly conducted the Marine Band and the Marine Chamber Orchestra at the White House, appearing there more frequently than any other musician in the nation.

Among the many honors and awards Bourgeois has received are the 1986 Phi Beta Mu Outstanding Bandmaster Award and the 1987 Kappa Kappa Psi Distinguished Service to Music Award for "contributions to the growth and development of modern college and university bands." In 1993, he was awarded the Midwest International Band and Orchestra Clinic Medal of Honor. Bourgeois was elected to the Academy of Wind and Percussion Artists of the National Band Association in 1988 and received the 1991 Phi Mu Alpha Sinfonia National Citation "for service and dedication to music and country."

Bourgeois conducted his final concert as Director of "The President's Own," July 11, 1996 (the band's 198th birthday), at DAR Constitution Hall in Washington, D.C. More than 3,500 people, including prominent musicians and government dignitaries, attended the gala event. Former Presidents Clinton, George H. W. Bush, and Jimmy Carter, as well as former First Lady Nancy Reagan sent letters of gratitude and praise that were read at the concert.

Secretary of the Navy John H. Dalton hailed Bourgeois as "a national treasure" and presented him with the Distinguished Service Medal from President Clinton. Marine Corps Commandant General Charles C. Krulak compared Bourgeois to the band's 17th Director, John Philip Sousa, saying, "Our Corps has not only had John Philip Sousa, we have now had a John Bourgeois. 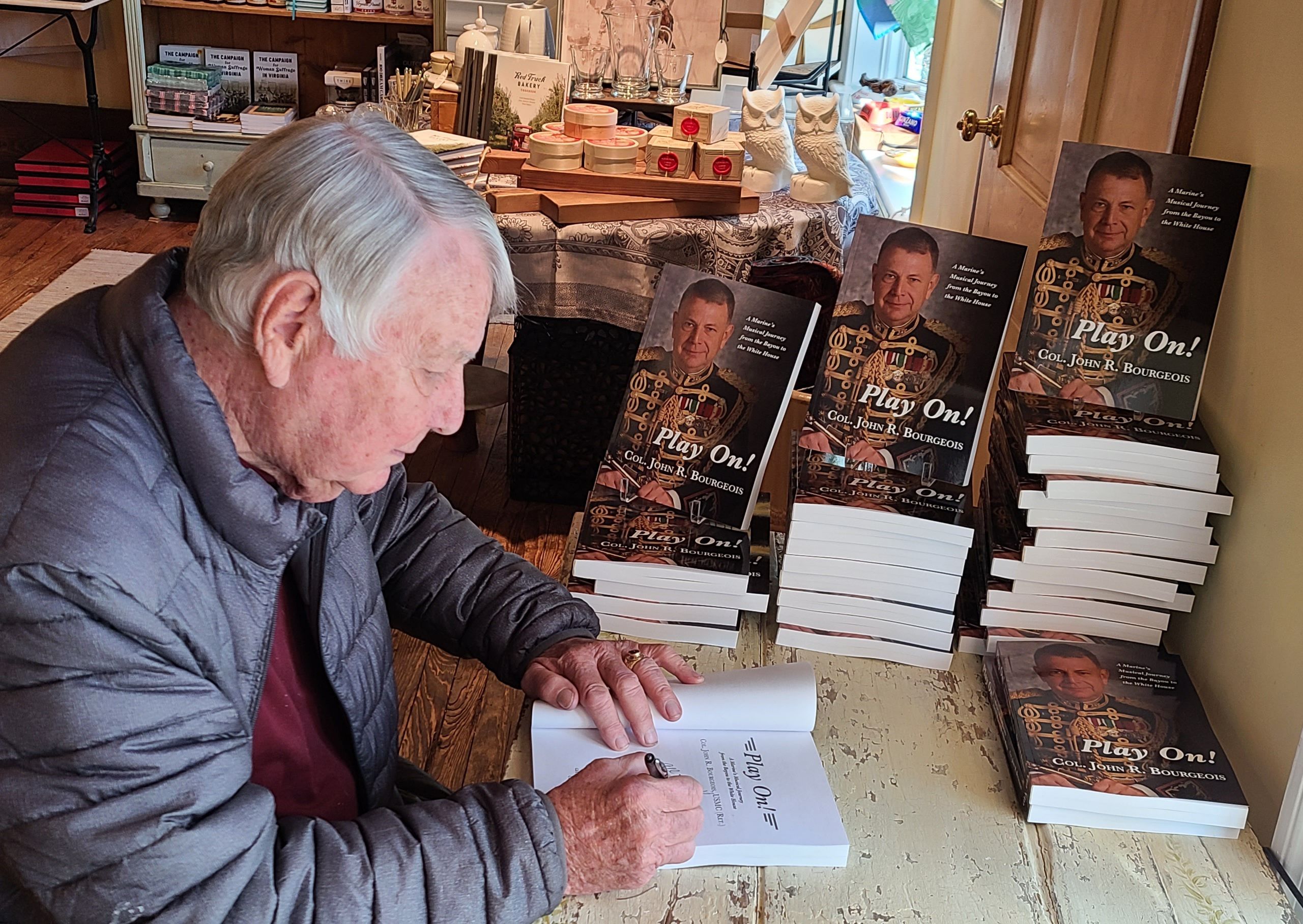 "Play On!" By John R. Bourgeois

Col. Bourgeois signs copies of his newly released memior, "Play On!" at R.H. Ballard Gallery in Washington, VA in January 2022

His legacy will never be forgotten by the Marine Corps or our nation." The change of command received national attention, being covered by CNN, ABC, CBS, The New York Times, The Wall Street Journal, and The Washington Post. ABC's Peter Jennings selected Bourgeois as the Evening News "Person of the Week."

After the change of command concert, The Washington Post's chief music critic wrote, "Bourgeois leaves his ensemble in terrific shape; indeed, it would be hard to imagine any band playing with greater vigor, precision, and timbral variety ... Washington is very generous with its standing ovations. But Bourgeois deserved each and every one he received last night."

Since retiring from the Marine Band, Bourgeois has been actively involved in music as a guest conductor, has published new editions of classic band compositions, and is a visiting professor in a chair endowed in his name at Loyola University in New Orleans.